How Music is Helping My Brain Surgery Recovery

This is Daryl Bennett, the guitar player. The rhythm of my life was completely thrown off beat this month when I had a ruptured cavernous malformation. A cavernous malformation is a cluster of additional blood vessels in the brain, and some people have this and they'll never know about it. But, it's common to rupture between ages 20 - 30. It hit me all of a sudden. One day, I wasn't able to say what I was thinking. It was like my brain was disconnected from my mouth. I went to band practice with this condition, and I was trying to teach Mark our bassist the root notes of a particular song. I knew that it was Em C G D, but I wasn't able to say it. I had a bad stutter. Long story short, I had to have brain surgery. The brain bleeding affected the expressive side of my brain, the ability to speak and compose. A common question was if I was still able to play music. Fortunately, yes! That part of my brain wasn't affected at all. The operation was a success, and I'm expected to make a full recovery. Unfortunately, the recovery is long, 1 to 2 months at best.

I can't work, I can't drive, I can't go to school, my wife took a long leave from work because I can't be alone, because I'm considered high risk of seizure for the first 6 months. I have 5 tasks each day: take my anti-seizure medication, don't get constipated, take short walks, don't strain myself and take many naps. The rest of the day is "free time".

I'm the type of person that would go crazy if I just watched TV and played video games all day. The sheer amount of unproductivity would drive me bonkers. I enjoy TV and video games, but only in small amounts. I can't do it all day, everyday for 1 - 2 months. Luckily I have music. The past 5 years, I haven't been able to practice music as much as I'd like. I've had religious service (LDS mission), job, family, and the biggest time consumer, my Computer Science University degree. Now I finally have a breather, and I can play several hours a day again. Even though it makes me tired and I have to take a nap in between practice. It really does keep me sane to have music, and to steadily progress every day. It gives me something to look forward to.


I'm also taking a break from band practice, until the doctor clears me next month to go back to work. My goal is to have all of the songs super tight. I'm just grateful that everything went well and that I have the coolest hobby in the world, and that I still do it. I'd be devastated if I lost my ability to play music. Music is my therapy.
Posted by Unknown at 11:54 AM 1 comment:

We've been making a big push towards our new Electronic Press Kit (EPK). We have two main goals with it:

1. Help us book shows. Make a great first impression towards potential clients. Show them that we have experience, that we sound professional and that we act professional. (Courteous, great communication, punctual, etc...)

2. Connect with fans. We want fans to engage with band, and to follow us on social media.

Initially, we treated these two goals as mutually exclusive. We thought that most of our shows that we book would be for cover songs, and that connecting with fans would be for our original content. So we created two websites. 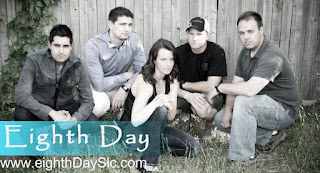 We have just decided to consolidate to one website that focused on our EPK. We created this blog to help keep fans engaged with the latest news, and we featured lots of links on our website to help direct fans to our social media.

While a lot of my work in my Computer Science degree has been involved in complicated algorithms, complex code, probability, and statistics, part of it has been simple HTML coding. I've been blessed to have the analytical and creative side of my brain working, and I was able to create a simple but attractive and intuitive website. (The joke is that many coders make awful interfaces.) We've pretty much finished our website.

We are now working to make professional content to showcase our skills. We have a studio date later this Summer to video record 4 of our cover songs live. We wanted to pick 4 songs that show that we can do classic rock, and modern pop hits. Allison, our female lead singer has a great voice, and we feel that these songs will really make her voice shine. We'll be singing:

We chose to record live in the studio opposed to going into the garage and video taping us raw with a video camera. In the studio, we will have access to an experienced sound engineer who can make sure the mix sounds good, and really give us a distinguished quality recording. We'll be recording at Full Fidelity Studios, working with Steve. We've been working with Steve with our full length album. Steve has been a pleasure to work with, and his work is amazing. He's worked on similar projects with other bands, and the live recordings almost sound like professional studio tracks.

We'll also be taking some professional pictures, in part to get some group photos with our new bassist Mark.

We're almost done with our full length CD, and we're very excited to release it! It sounds so good! We can't wait for the finished product. Here's a teaser one of the tracks:

Posted by Unknown at 3:53 PM No comments:

Cover band or an original band?

Eighth Day splits their efforts between supporting their own original music playing shows and recording, and they also focus on playing popular covers at parties and special events. While there are other bands that do this, many choose one or the other, and there are advantages to each. Eighth Day tries to get the best of both worlds.

Being a "cover band" means that you play covers of popular songs. Eighth Day focuses on Classic Rock, Modern Rock, and Pop hits. Right now they have 42+ songs which is about 3 hours of music. Playing covers means getting more frequent gigs, playing in front of wider audiences, getting paid better (Money isn't everything, but it sure is nice to get paid for your hobbies!), and listeners instantly connecting with the music easier because they recognize the songs. Generally you play at weddings and parties, which is cool because you get treated like VIP at somebody else's party, and you get fed!

While there's a lot of perks to being in a cover band, there's also a few challenges in my opinion. It can take a lot of time to learn all the songs and build your set list at first, especially if you only practice once a week. It can feel a little repetitive playing the same songs over and over again. Sometimes you feel like you're riding other artist's coattails.

Being in an original band is really rewarding. I love songwriting. There's no better feeling than see all the different stages of development of a song, and to see the finished product. It's exhilarating to hear the band play it, to play it live in front of an audience, to see people sing along to the words of your song, and to record it in a studio. It's like breathing life into a living entity. Even though it may not reach many ears, and it's a small droplet of art in an ocean of digital media, there's pride knowing that your song is YOUR song. Promoting your originals can be fun in the sense that you're promoting YOUR work. It exciting to see your brand grow.

Being in an original band also has it's challenges. It's a whole different ball game to be promoting your music. I think of the AC/DC song "It's A Long Way To The Top (If You Wanna Rock 'N' Roll)"

Eighth Day for the most part has been lucky and has had great opportunities to play some awesome shows to promote their original music. Also all the members of the band have been fortunate to not be in it for the money, and have jobs. That said, it's nice to make a little bit of money to justify buying new gear.
Not all experiences have to be negative. I'll mention some negative things so that you can avoid them. If you work hard, you can "make it", and live the dream.
Many venues or outdoor festivals know that young bands are trying to "make it." They offer to let bands play for free, as if "exposure" was compensation, or they make bands "pay-to-play" where bands have to buy x amount of tickets and try to sell them to their shows.
Playing at clubs and bars are way better, and are a great option if the members of your band is 21+. They don't pay as much as private parties, but they do pay. It's a long way to the top to get a following.

Eighth Day enjoys the perks of playing in a cover band and an original band. Sometimes it can be challenging to decide what takes priority. Last month, the band was working really hard to working on their press kit, which will include some professional live videos. When they got booked for a July 4th party gig, and they switched focus on tightening up their set list and adding some more covers. The press kit will have to wait until after the gig.

What do you prefer? Being in a cover band or an original band? Do you do both as well? How has your experience differed? Leave a comment below!

'Hello World' is a tradition among Computer Science people. When learning a new programming language, or coding in a new environment, you create a 'Hello World' program. Since this is the first blog post that's related to the band, 'Hello World' seems fitting.

We'll post exciting news and announcements about the band in this blog. We might also talk more about us, and our views on music, etc... 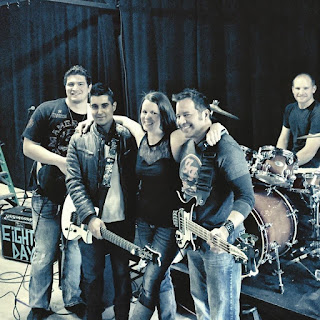 (Battle of the Bands competition 2016)

Posted by Unknown at 8:56 PM No comments: