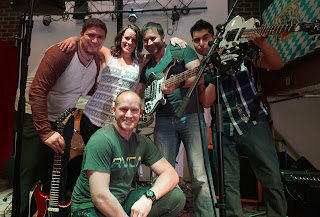 We had a great show at Ice Haus this weekend. A new local band, The Harvest was playing an hour
of their original content, and the Ice Haus contacted us and asked us to play after The Harvest.

The Harvest is a two man band, and they take turns drumming, playing guitar, and singing. It takes serious guts to perform with only two people. All of the stuff that I write, I try to fill it all up with as many instruments as I can, while these guys were minimalists and were still able to convey their music in an excellent way. You can hear your stuff below. 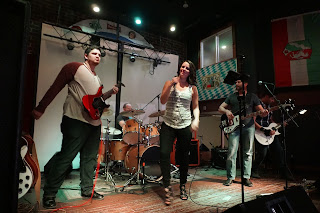 This time we had a sound guy, and he was an expert. It was nice to have monitors, and level sounds. While the place wasn't packed, there was an awesome energy with the people that we brought and some of the new unfamiliar faces. The crowd was very responsive by cheering after every song, and singing and clapping along. We were able to feed into that energy. We danced like we've never danced, and Nate went to the front of the stage during his solos and played like an 80's shredder.

The audience were very generous by leaving tips on the stage. We almost made more money in tips than the money we made at the door. We were very humbled by such an awesome audience! We also had many people shake our hand afterward, and take our business cards. 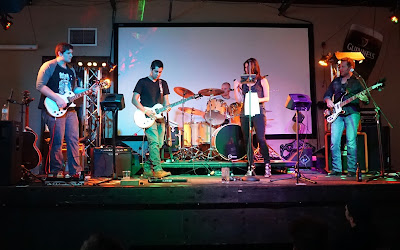 We had a show last weekend at Leatherhead's. Overall it was a positive experience. It was a full house, and we had lots of friends and family come. We were stoked to see our old bassist Ryan Clark come cheer us on.  The crowd was responsive and very fun. We sang Happy Birthday to a man, which pleased him and his family so much, they wanted to take pictures with us after the show. The lighting was pretty cool, it was probably the coolest light setup I've had at a show. I personally didn't have any food, but the food looked really good, and everybody said it was delicious. People had burgers, wings, fries, nachos, it all looked really good!
We had a person who works for Gallivan's Plaza come scope us out to possibly have us gig there.

It was a little hectic and stressful at first. Just like our last restaurant/bar gig, the sound guy didn't come. At least this time he let the manager know ahead of time. We didn't know how their sound system worked, and nobody at the place knew either. Aaron had to run home and quickly pack his PA system. (We didn't want to mess with their system and not have it work)

Posted by Unknown at 7:30 PM No comments:

We've been featured as the Top Performer for Salt Lake City on the website, GigSalad.com! We get awarded this honor if we get a lot of leads and book lots of shows. I'm surprised that we were able to get this award, while only maintaining a free account. Monthly fees for a paid subscription are $30.
More info on how to earn top performer. 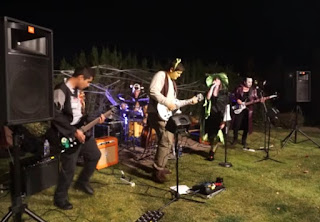 We had show on October 28, the Saturday night before Halloween. This is the second biggest night for bands to be performing.
We were contacted on GigSalad about this gig. Our client asked how we were different than some of the other bands for hire on the website. We expressed that while we have only been actively gigging for 6 months, we have 30+ years of accumulative experience and that we had an awesome set list of about 50 songs, and we showed our new live videos, which are on par with the best acts in the local scene. We were excited when we got the gig.


We were impressed, the client's house was very large and beautiful. I was at first ataken back that we were going to be playing outside. Luckily, it wasn't cold at all, and we could play as loud as we wanted. At other parties, we tried to play as quiet as we could. As in amps were turned down to 3, the drummer was using brushes. This time, my tube amp was cranked to 8 on it's 30W setting, the drummer was playing as hard as he could just to keep up with us. 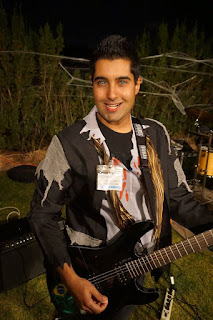 It was a costume party. The guests had some pretty spectacular costumes. We also dressed up. Allison couldn't decide, she came dressed as a devil, changed into a witch costume, and changed back into a devil. I was Shrek, Nate was a zombie, Aaron was cow poo, and Mark had a spectacular Jared Leto Joker costume. He went all out with the clothes, make-up, and teeth.

The crowd was very responsive, and this was one of the most enjoyable shows that we've played. People were dancing on the back patio, and on the deck above. Everyone was very complimentary. Our host was so pleased that he asked us to stay an extra hour. During the extra hour, the police were called. So we took a small break and then finished our set list, playing a little softer.

Our host asked us to be his party band, and we would happily play again! We're very pleased with the review that he left us! That makes 5 reviews on our Gig Salad! One of the best in the SLC Valley. 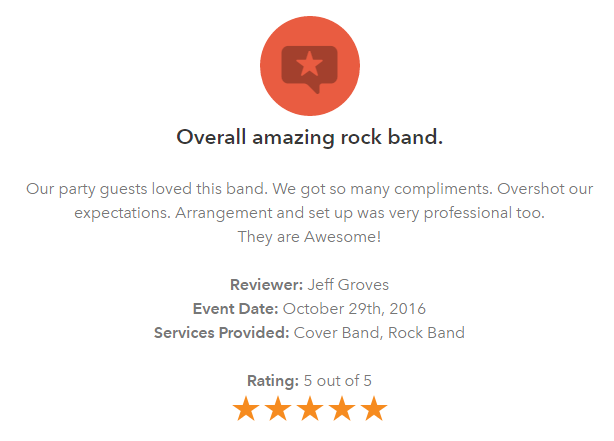