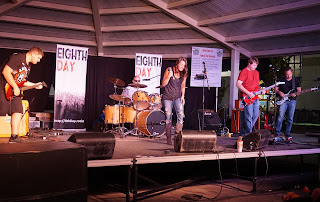 This was our second time performing at the Utah State Fair; we previously played there in 2015. Last time was our last show with Ryan, the previous bassist. This year was Dean's first show with us. He's only been living in Salt Lake for 3 months, and he's already playing his first gig!

Growing up, one of my neighbors played at the State Fair every year, and he made it sound like it was the dream gig; the most high profile gig that any musician could aspire to get. 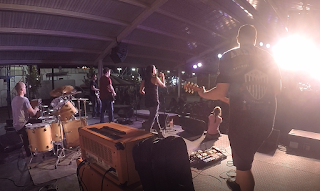 With that perception in mind, we were disappointed in 2015.  It was on a Wednesday night at 9pm, and we were performing to a nearly empty crowd. We were playing for free. Parking was
$10 for each vehicle, and we had to pay for our family members. And we received no food vouchers. It felt like pay-to-play, as we lost money playing that show. 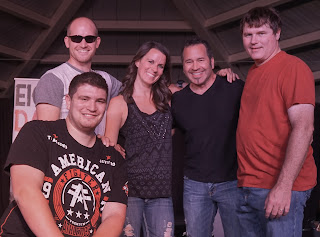 This time around, it was a little better. We got paid, a modest amount. Almost enough to cover the cost of parking, and bringing in family members. Although it was a weekend, and there were quite a few people who watched us, it still wasn't a great turn-out. Probably because of the late hour, and Saturday is always busier than a Friday. 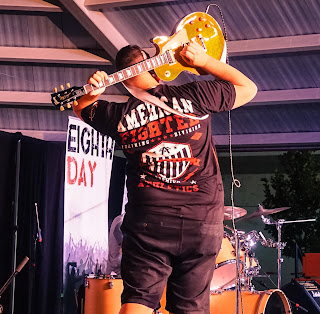 We were only given one delivery pass, so we met in the parking lot of a nearby grocery store, and crammed as much equipment as we could into Aaron's truck. The rest of us carried the rest of our gear from the parking lot. We got to the stage early, so we wandered a bit until it was our turn to get setup. The band before us was a Beatles Tribute band, made up of some older gentleman with some really cool hippie apparel. While they put on a great show and had every right to feel like a rockstar afterwards, they immediately left the stage to go mingle with friends and family, leaving all their gear on stage. We're only given 30 minutes for them to take down, for us to setup, and soundcheck. Which isn't much time at all. After a few minutes, it was apparent that taking their equipment down was the furthest thing from their mind. I had to wade through the adoring fans and ask each one of them individually to please take their gear off the stage. They seemed a little annoyed, but they did it. I think it was lack of gigging experience, not blatant rudeness. 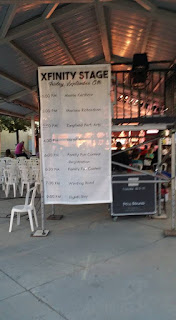 Their delayed take down, made our setup a little more frantic, but we were able to get started and finish on time. I recorded a FB Livestream on my phone on a tripod. It turned out better than expected. We had quite a few viewers, and interactions. We also got some awesome pictures.

Overall, it was a good show. It was a good motivator for Dean to have a gig to get ready for. Mark assured us that Saturday during the day is much better. It still rubs me the wrong way how stringent they are with performers, they ask you to play for free or at a reduced rate, and then they try to get all the money they can out of you.
Posted by Unknown at 10:36 PM