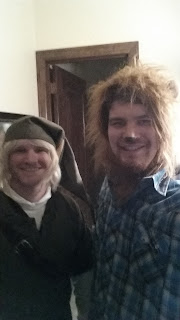 Last year, we had a great time playing at a Halloween house party in Sandy. This year, Mark and Dean were out of town, and we weren't able to play the party as a band when they requested. Aaron and I offered DJ services for their party and they accepted. In addition to playing music, and lighting, we did karaoke as well.

We had a good time. Although, lots of people were dancing and singing, this crowd reacted better when we played as a full live band. They want us back next year, but the whole band. We also met some people at the party who are looking for a band for upcoming parties.

We had such a success, we decided that we might do more DJ gigs when they present themselves.