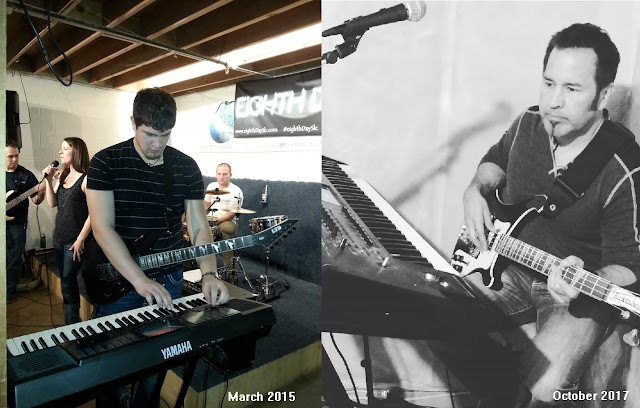 Once upon a time, I used to play guitar and keyboard in the band. Then one day, I just got sick of hauling my keyboard and guitar rig to every rehearsal and gig. Our show at Wasatch Musician was the last time I played keys at a gig. It helped give a unique edge to some songs, by using guitars to fill in keyboard parts. Such as the beginning part of "Don't Stop Believing". We're pretty happy with how it turned out.


While we were satisfied with filling in the keyboard parts with two guitars, every once in a while we were reminiscent of how awesome keyboards were in certain parts. We decided against getting a full-time keyboardist in the band, because having more than 4 instruments in a rock band, clutters the sound.
Recently, we've been playing a lot of modern pop and 80's songs, and Mark has decided to step up and start playing keys. While Mark is a fantastic bassist, he identifies more as keyboardist. So I'll be doing bass, while Mark plays keyboard on some songs.

We'll be introducing keyboard next weekend at our weekend set at Club 90. We hope to see you there!

Email ThisBlogThis!Share to TwitterShare to FacebookShare to Pinterest
Labels: keyboard