Why we don't play shows in Provo any more...

It was March 2015, and we were doing really well as a band. We had just released our Starlit Horizons, EP and had been receiving good feedback from it. We were trying to play as many shows as we could to promote our original stuff. Our songs we wrote to be full, energetic, have anthem-like choruses, raging guitar solos, lots of crash cymbals, and harmonic guitars.

We were invited to play BYU's Restaurant/Venue, "The Wall", part of their semi-annual Battle of the Bands. This was our first time playing in Provo, and we were stoked to be reaching a new audience!
We scoped the competition beforehand by looking at their social media to gauge our chances of winning. There were some good bands playing, and we were lucky to be sharing the stage with such talent.

I probably most-likely overestimated how good we were, at least at live performance. In theory, we had one of the larger followings, probably the best looking web presence (my opinion isn't biased by the fact that I do all of our media, I promise), and our songs had probably the most complexity as far as musicianship was concerned.

We were pretty stoked, brought all our new stage banner, our fans, friends, and family and we were ready to rock! The first offsetting thing was that we were one of the last performers, and people
looked like they were ready for this event to be over. Everybody was sitting, and it was clear that they weren't going to engage in our high-energy music. Next was the sound guy, he insisted that
we didn't need a sound check. The guitars were so loud and overpowering. It was a small venue, and it wasn't enjoyable to listen to us. The sound guy didn't adjust any level on his mixing board during our whole set. It threw off our mojo every time we'd look out at the empty-eyed, reaction-less audience. (Besides my wife and sister who were jumping up and down by the stage.)

We got our score card back from the judges, and we placed dead last. Most of the comments were, that they couldn't hear us over the overbearing guitar.

Then we got this awesome press in some music blog of one of the concert goers. 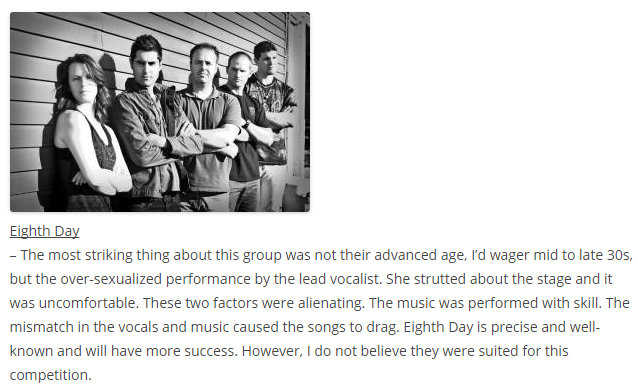 It's true, Ryan the bassist at the time was in his early 30's. The rest of us were college-aged; in our early 20's. I just turned 24. I thought that was a weird comment coming from someone attending BYU.  Men at BYU go on missions and then begin college at age 21. I'm 6'5", and that might make me look older.
Allison was wearing a modest dress that would be fitting to go to Church. She was moving around the stage, but it wasn't sexualized at all. (You can see how she moves around on the video below)
I hope this blogger's discomfort of women wasn't shared by the whole audience that night. Then there was this gem:

His verdict rage at the end seemed to be directed at us. It's no secret that folk/singer-song writer/indy music isn't my favorite. Even though that genre was extremely trendy at the time, especially in Provo. I grew up on Rush and Dream Theater. More is more. I'm not a fan of super simple guitar or piano riffs, lack of instrumentation, lack of drum fills (if there's even drums), lack of guitar solos, lack of energy and the obsession of trying to be "original", by dressing like a hipster and trying to sound like The Lumineers. *

Whatever the case, we felt like a lot of people were extremely judgmental and it gave us a bad first impression of Provo. (We don't want to discount all the awesome support we got to everyone who went down to that show!) But, we're over it now.

Honestly, the main reason that we don't play down there because we have plenty of opportunity here in Salt Lake City; and we all live in Salt Lake City. When we weren't having as many opportunities to gig, we were willing to make the long drive down to Provo for a 20 - 30 minute unpaid set. We are totally willing to play there again given the right opportunity. In fact, we did a livestream concert at Rock Canyon Studios last June, and it was a blast, you can check out some of those songs on our YouTube!


*My statements on the indy genre were over simplified and generalized. I do appreicate the talent that goes into it, and blah blah blah. If you're offended, get over it. ;) I'm just one guy, what do I know?
Posted by Unknown at 3:35 PM